We did it! We took Olive in for her 8 week appointment on Monday, and she got the all clear from the surgeon. He said that she looks great, that everything healed beautifully, and that we can start conditioning her to get back to running and playing like she used to. We’re still doing weekly rehab appointments, and she’ll graduate on April 12th. We’re supposed to start incorporating a few minutes of a light jog/run with her and then do a cool down. I’m not exactly sure how she’s going to like doing it, but if we let her go from zero to sixty, she’s very likely to strain a muscle (or two).

She’s going to be heading back to the pet sitter (aka her favorite place on earth) next month while we get away for our anniversary, so we need to make sure she’s ready to play the day away with all of her furry friends! We’re visiting friends next weekend at the beach, so it’ll be really fun to see her playing in the sand and water again. She has always liked the water, but always been a little apprehensive, and we’re excited to see how she does now that she’s been doing hydrotherapy for 3 months. Although, at the beach there’s no peanut butter to work for. 😉

Thank you for following along on this journey with us! It’s been a looooooooong time coming, but we all worked hard and we made it happen! I can’t wait to share some of our adventures with you!

This morning was Olive’s second visit to rehab. Like I had mentioned in my previous post, we were going to try hydrotherapy to see how she did before committing to it 100%. The doctor and the tech gave her a good check, and did another ultrasound on her hip flexor to try and loosen it up just like before. After that, it was time for the pool! Olive was a little apprehensive about getting inside, but she did great once she did! They start out with just a little bit of water in the bottom, and once the dog is inside, they fill it up more. (I wasn’t sure how it all worked until today) It took her a second or two, but she got the hang of it pretty quickly! She would occasionally just ride the treadmill backwards, and then have to work even harder to get back to the front. The peanut butter smear on the glass certainly helped. The tech was really impressed with how well she did for her first time, and was happy with how everything went. After drying her off, we learned a few new exercises to try at home, as well as practicing a couple that we had already been working on. They also used a laser on her again – but this time we tried a different laser. This one wasn’t as strong, and didn’t involve those cool goggles like before. 😉

We decided to go with the hydrotherapy package. She did really well with it, and the tech told us it was a great way to help her burn off any extra energy she may have – and boy does she have a lot right now! – so that was definitely a HUGE selling point! We have about a week and a half until her next appointment, so we’ll continue to work with her at home, and hopefully she’ll be back to her old self in no time!

Thanks for following along!

Yesterday was Olive’s first rehabilitation appointment. The first one was included in the cost of her surgery, and was 90 minutes long. The doctor came in to do some measurements, and to check her range of motion. While she’s doing quite well, she has lost about 4cm of muscle on her bum leg, so we have some work to do to get it up to match the other leg. They also noticed that her hip flexors were quite tight, so they did a little bit of ultrasound to help warm, and loosen, them up a bit.

We were taught several exercises that we’re supposed to do with her everyday to help her start using her leg again. While she walks on it just fine most of the time, she’s still really compensating by putting most of her weight on her other three legs. And believe me, we want to do everything we can from having her harm the other back leg! The tech also showed us some massage exercises that will help her muscles from being quite so tight. She’s just like me with those tight hamstrings!

One of the last things they did was laser therapy. Apparently the day of her surgery, they went over to the hospital and did the same procedure as they did last night. We had to wear special glasses to save our eyes from the laser beams, and Olive had to wear goggles. It was my favorite part of the whole day! She looked so hilarious.

The laser apparently helps her muscles, and cells, to repair more easily. She was such a good girl the whole time we were there, and while we know that we have work to do with her, they were also very impressed with her, too.

We’re going to try and keep up weekly appointments until her 8-week check where they take x-rays to see if the bone has healed correctly. We take her back on Monday to try hydrotherapy – I can’t wait to see that! -and she how she does. We want to be able to see how she takes to the water as opposed to “land” exercises similar to the ones we were taught last night, and then choose the direction of therapy.

She was pretty jazzed up last night afterwards, and had a hard time settling down. They did say that she’d be quite sore for about 12-24 hours, so hopefully during the day today she’ll get some good rest so Nick and I can work with her tonight. Most of the exercises seem to work best with two people as it’s helpful to have someone ready to go with the treat, and the other making sure she’s doing the movement correctly.

I’ll check in next week after her first hydrotherapy appointment!

Another delicious weekend day is in the books. This was our last eat on repeat of Day One, and while at first we thought we might be over it, we weren’t. Don’t get me wrong, we were ready to move onto a new week of food, but we were happy to finish out the week strong – and tasty! And even after a week, we still didn’t quite get through the Hot Spinach and Artichoke Dip. The amount of food is seriously no joke! We started out our (very HOT) day at a local park to get Olive some good exercise and to enjoy the outside a bit. While walking back to the car we happened to see a deer across the road. Olive was really intrigued, and they watched each other for a bit, but neither one made a sound or attempted to run off. It was pretty cute. I’d like to think they would have been friends. 😉 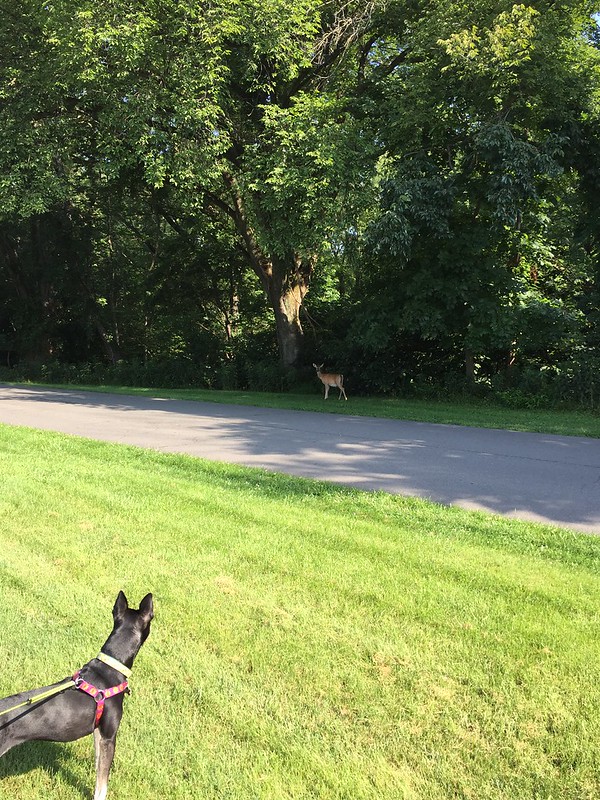 As Nick mentioned yesterday, we got to enjoy “real” breakfast and have a dessert as it was a weekend day. 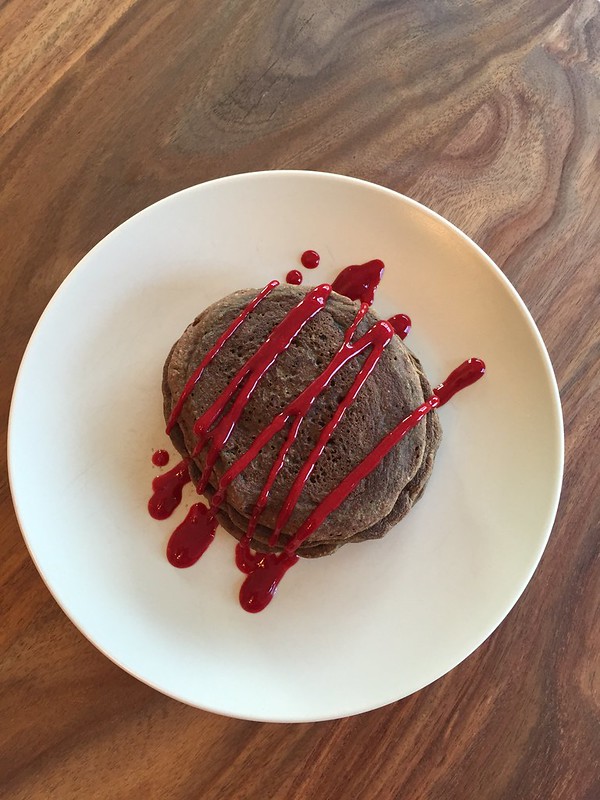 These were DELICIOUS. They were super satisfying and just wanted we wanted for a Sunday morning breakfast. Nick made an awesome no sugar added raspberry sauce (defrosted raspberries pulsed, strained, and then pulsed again with a touch of water, juice of half a lemon, and a drop of liquid stevia) that was the perfect compliment. Mmmmm. So good. I could have eaten about 12 of these! 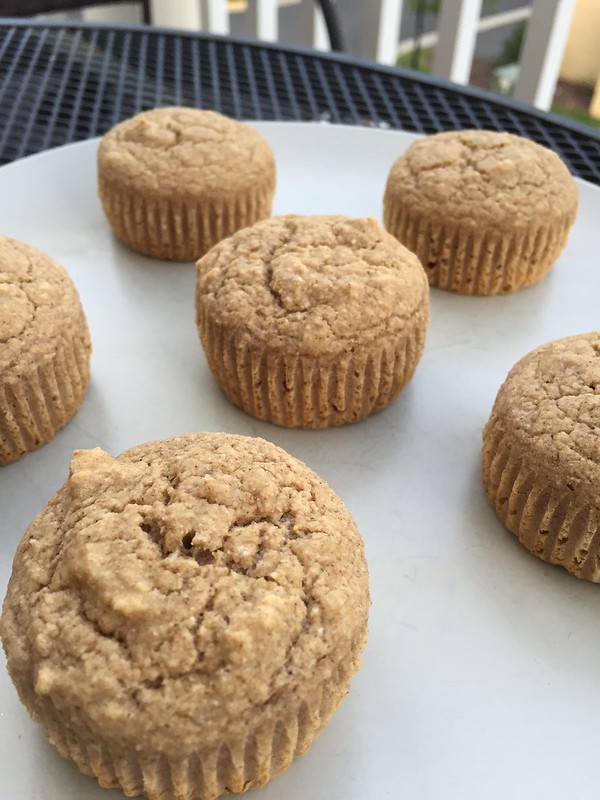 We made this into muffins as we halved the recipe to make only 2 servings. We were afraid that it wouldn’t be quite right if we tried to bake in a loaf pan. It was also great to have multiple muffins to make the yummy dessert last! Each of us got 3 muffins. I don’t know how she did it, but Somer has come up with the best gluten free blend EVER. It’s magic! It doesn’t taste gluten free in the slightest, and the texture and rise she gets is just plain amazing. These muffins weren’t overly sweet, but it fulfilled that carb craving that we’d been having. They would also be delicious with some chopped up apple inside.

Thoughts on day seven: well, we finished out the week strong – and full! It felt as though we were able to eat all day! You can also snack on any other fruits or veggies you’d like throughout the day, so we snagged (Nick did chose it) a delicious watermelon that we snacked on a bit after dinner. It’s hard to believe we’ve gone a week without sugar. I even managed to drink (and enjoy) an unsweetened iced green tea from Starbucks!

On to week two! 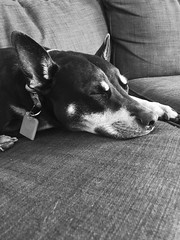 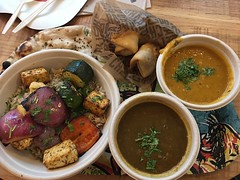 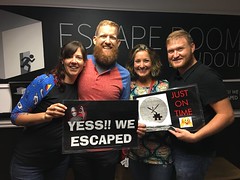